We Should Be So Smug

A rural village of artists, trades folk and makers gather of an evening to hear their story-tellers recant tales of persecution, corruption and misfit elites.

Introducing We Should Be So Smug, an audacious and shamelessly political short musical film Secession/Films is proposing to produce in collaboration with communities, artists and filmmakers within the Shire of Nillumbik.

This is an open invitation to local artists, trades folk, artisans and small businesses interested in participating and / or supporting the production of We Should Be So Smug.

We Should Be So Smug takes places in post-utopian rural Victoria. Cities have outcast their buffoons, the last of thousands foolhardy entertainers, eccentrics and artisans. Automation, robotics, sophisticated personal entertainment systems and a living wage has replaced the need for these makers. Many found solace in rural areas revitalising scant soils so that they may feed themselves. One such community, on the outskirts of Hurstbridge, is host to a small population of of trades-folk, artists and storytellers. Amid the rubble and threadbare bush the story-tellers produce ad-hoc festivities, re-telling stories about forgotten times so that they may be remembered for generations to come. We Should Be So Smug is one such tale.

The a draft of the script may be downloaded keeping in mind it is under constant review. Not all characters under development appear within the script.

The film based around a song I had written for the first nation-wide rallies in Australia demonstrating widespread condemnation of our government’s appalling treatment of asylum seekers. The song also lambastes their blatant endorsement of corrupt bankers and heavy industry elites at the expense of environment and a burgeoning renewable energy sector. In short, I wanted to write a song that gets straight to the point, no mucking around; they need to know we’re onto them.

The film is a collaborative production bringing together artists, trades folk and artisans across disciplines. We intend to produce the highest quality work with all manner of means in the shortest time possible. As artists and filmmakers working within community our collective response is as valid as protesters feet on the ground. We can reach audiences that others may not. Because it’s urgent. Because doing it together furthers the possibilities for creative response to the crucial issues of our time.

All the main scenes in the film will be shot over an entire evening, a total of some 12-14 hours, within a single location. Key scenes that synchronise with sunset, moon and sunrise will be single takes only.

Some scenes will be rehearsed on location with as few run-throughs as possible. We want to capture a loose, ad-hoc, relaxed community of people having fun together.

The film will be shot in a rural setting amid derelict farm sheds and / or machinery. The setting is a makeshift village of artists, makers and handy folk. Their dwellings are lantern houses, around 1-1.5m square.

Our ‘village’ will be set on the grounds of the Hildebrand Ridge Organic Vineyard in Cottles Bridge, Victoria and, permits permitting, the Murtoa Stick Shed located on the Wimmera Plains.

The film will be shot between sunset and sunrise on a full moon night. Most scenes will take place under moonlight with a strong cinematic quality to the final work.

The village is comprised of lantern houses, and outdoor work spaces. This may include a blacksmith’s’ forge, wood-working areas, artists life-drawing and painting enclosures and open fire-places. 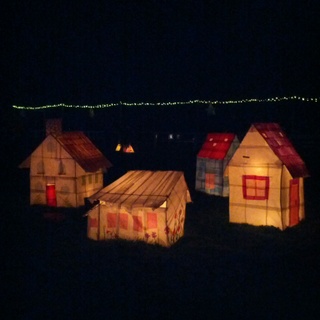 Lantern houses fabricated by community artists for Into The Light, City of Whittlesea. Photo – Andrew Garton

One of the lantern houses will be entirely lit by black and white video projections. 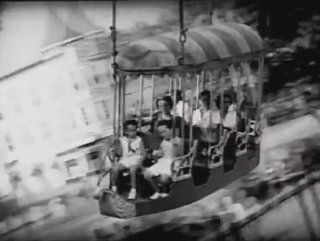 From ‘Happy Days‘ by Chip Wardale

The grounds of the village will support at least two open fires and trees adorned with lights. A small atrium will shelter an artist’s easel and their subject, a well rounded fellow, wrapped in tiny lights

The cast is largely comprised of professional artists, trades people and artists. Rehearsals will take place on the shoot. We are keen to create the sense of an ad-hoc community of people learning to live with each, re-learning what it’s like to live closer to the elements, their skills and willingness to be with each other helping to overcome the challenges they may encounter in the world we will create.

Lead characters include a much older Black Harlequin and Crazy Priest. 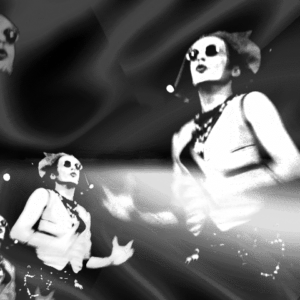 A young Black Harlequin. Photo by BigK and Pasi 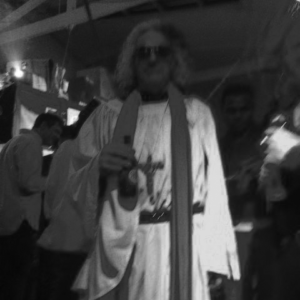 Some production costs will be made available pro-bono by the filmmakers, production cast and crew, musicians and any small businesses supporting the project. However there are items we still need for our shoot. This includes the hire of special lighting, a generator, catering, gas for heating and some additional props. A crowd funding campaign be launched to raise production costs itemised below.

Every single crew and cast member, every supporter, from small businesses to the fella who offered his van will be credited in the film, listed on our website with links to yours and social media pages, including a listing on all long format publicity materials.

If you have any other ideas on how we can support your contribution do let us know.

Want to be involved?

We’re looking for a local First Assistant Director, a runner and grip.

We would also be interested in a choreographer to assist in the larger group scenes.